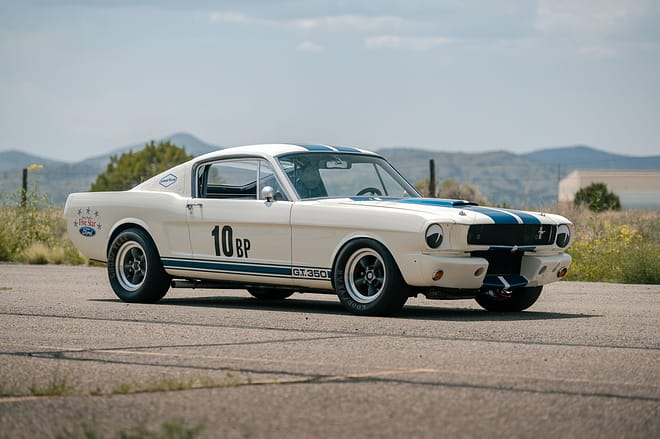 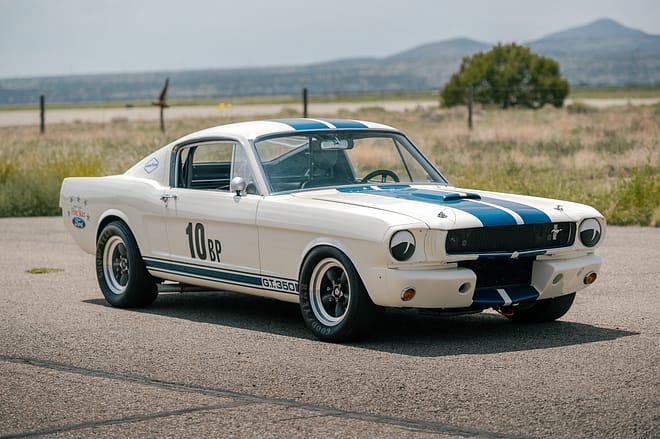 Chassis SFM5S112 was ordered at Shelby American on 12/22/1964 and was completed on 5/6/1965. The car was first shipped to Ford liaison and Carrol Shelbys right-hand man, Ray Geddes, on consignment as one of the five Public Relations GT350s. Heavily used by Ford, SFMS112 was the only one of the five to have been driven a significant amount. As a result, it was shipped to Hi-Performance Motors of Los Angeles, California to receive a full engine rebuild under warranty in period.

It was not until late 1965 that the first owner, Hank Smith, took delivery with the full intention of turning it into a full-blown racecar. In 1971, SFM5S112 obtained its SCCA logbook and raced for the next 8 years under new owners Meloche, Harvey, Lutes and others. It is prudent to note that in this period it was a dual-purpose vehicle being raced on the weekends, while still being used as a streetcar as photo-documented.

After years of competition use it was retired it was restored by Cobra Automotive to 1965 R-Model trim and specs. Conforming to both HMSA and FIA regulations it made its debut in the Monterey Historic race for the Shelby 50th Anniversary.

Today, chassis SFM5S112 is accompanied by extensive documentation from new and presents in exceptional condition throughout. This car would make a great candidate for vintage racing events (the car is currently registered for street use) or will be a show stopper on your preferred circuit.

We might know where another 1965 Shelby Mustang GT350 is laying around.